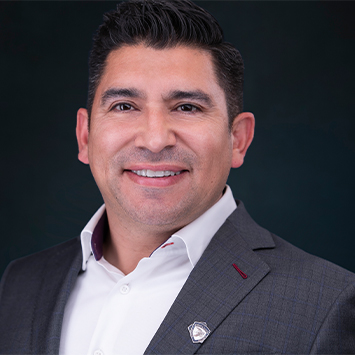 Both his parents were from Albuquerque, New Mexico. Lawrence was born in San Diego and moved to Fresno in 1976. He presently lives in Fresno with his wife Florinda and their daughter, Marina. Lawrence led the life of a normal teenager growing up in California with a Hispanic heritage. His father worked his way through the ranks from a patrolman to a detective with the Fresno County Sherriff’s Department. In 1984 his father started his own security guard and private investigation business “Aztec Global Security Services”. While growing up, Lawrence assisted his father in all aspects of the business, initially as a guard and eventually as a field supervisor. His mother was a homemaker; who also worked at Saint Agnes Hospital for 27 years. Lawrence attended Fresno High School where he was a Navy Sea Cadet; he graduated in 1989.

Lawrence entered the U.S. Navy in July 1989. While in the U.S. Navy, he reached the rank of “Damage Control Specialist Second Class E-5”. The ship he served on was the USS Gompers, a destroyer-tender. Visits he made to foreign lands while on the USS Gompers included: Japan, Korea, Australia, Hawaii, Fiji, Guam, Midway Island, Kuwait, United Arab Emirates, and Saudi Arabia. He saw war in the Persian Gulf during the first Gulf War where he received his Gulf War Veteran status. He received a Navy Achievement award for fighting and controlling an onboard fire that threatened both ship and crew. While he was stationed in San Francisco, he would make the occasional trip home to assist his father in the business. He was honorably discharged In April 1993. Education and Training attended by Lawrence include.

Education & Training attended by Lawrence Include:

After his discharge from the U.S. Navy, he worked as an EMT/paramedic for American Ambulance, as a Firefighter for North Central Fire District in Fresno County and as an Emergency Room Technician at Valley Children’s Hospital in Fresno. In 1998 Lawrence entered Peace Officer Training Academy at Fresno City College with the plan to follow in his father’s footsteps as a sheriff. In 2000 tragedy struck the Garcia family when their father passed away unexpectedly. Lawrence was the last person to see his father alive and held him in his arms while performing CPR. This is when Lawrence’s life came to a screeching halt; his family needed him then to take over his father’s business. Lawrence, merely two weeks away from graduating to become a Sheriff’s deputy, immediately took the helm of the family business and ensured that all outstanding obligations were met and that his mother did not have to be concerned about the business and financial needs of the family until all existing contractual obligations were finalized in 2003.

In 2002, Lawrence decided to start his own business, AmeriGuard Security Services, Inc. This business started with some of the old clients of his father’s business who wanted to stay with a proven formula and with a reliable and professional security guard service provider. This business has grown from 20 employees in 2002 to recently at times more than 600 guards with annual revenues in excess of $15 Million in 2017. AmeriGuard provides armed security services to Federal agencies throughout the United States at various high-level facilities requiring Secret cleared guards. In addition to being a successful entrepreneur and business owner, Lawrence has also committed himself to serve his community. In 2014 he became a planning commissioner for the City of Fresno and in 2018 he was appointed by the governor of California to serve on two disciplinary committees with the Department of Consumer Affairs, Bureau of Security and Investigative Services.